As Donald Trump visited his golf course in Sterling, Virginia, on August 1, he was greeted by a series of signs that read, “Person, Woman, Man, Camera, TV,” referencing the cognitive test the president boasted about acing during an interview on Fox News.

During the viral interview, Trump said the doctors who administered the test were “amazed” at how well he did, and he recalled what he believed was one of the most difficult parts of the exam. Trump said that he was required to memorize a list of words: “Person, woman, man, camera, tv.”

The signs person, woman, man, camera and tv are outside of Trump’s golf course https://t.co/dA0jncYVTN

After successfully rattling off this series of words, Trump said doctors told him that he did very well and he “got extra points” for repeating them in order. “They said nobody gets it in order. It’s actually not that easy, but for me it was easy,” Trump told Dr. Siegel. “That’s not an easy question.”

Afterward, according to Trump, the test got “much more difficult,” and he said that somewhere between 15 and 25 minutes later, he was asked to repeat those words again, which he did, also repeating them for Siegel. “They say, ‘That’s amazing. How did you do that?’” Trump claimed. “I did it because I have a good memory because I’m cognitively there.”

According to CNN’s Jim Scuitto, the president has arrived at the Trump National Golf Club at 9:59 a.m. local time on Saturday. Scuitto tweeted, “This visit marks Trump’s 376th day at a Trump property and 283rd day at a golf club.”

Last Month, Trump Was Greeted By a Grim Reaper While Visiting His Golf Course Amid the Coronavirus Pandemic

When he arrived at his golf club, the Grim Reaper was waiting to remind him of the same.

A sad state of affairs. pic.twitter.com/bfIBaSUneC

Three weeks ago, Trump was greeted by a protester dressed up as the Grim Reaper holding a sign that read “137K,” a photo that quickly went viral on Twitter.

The “137K” sign referred to the number of deaths in the United States due to coronavirus. As of Sunday, July 12, COVID-19 has claimed an estimated 137,000 American lives. The same day, Florida reported at least 15,299 new cases of coronavirus, the highest single-day number reported by any state since the pandemic first broke out.

When he arrived at his golf club, the Grim Reaper was waiting to remind him of the same.

A sad state of affairs. pic.twitter.com/bfIBaSUneC

Trump’s golfing trip on Sunday marked his 276th visit to a golf course during his 1,270 days as POTUS. Trump defended himself for golfing by tweeting that “Obama played more and much longer…rounds, no problem.” However, according to Forbes, during President Barack Obama’s first term as president, he played a total of 113 rounds of golf. 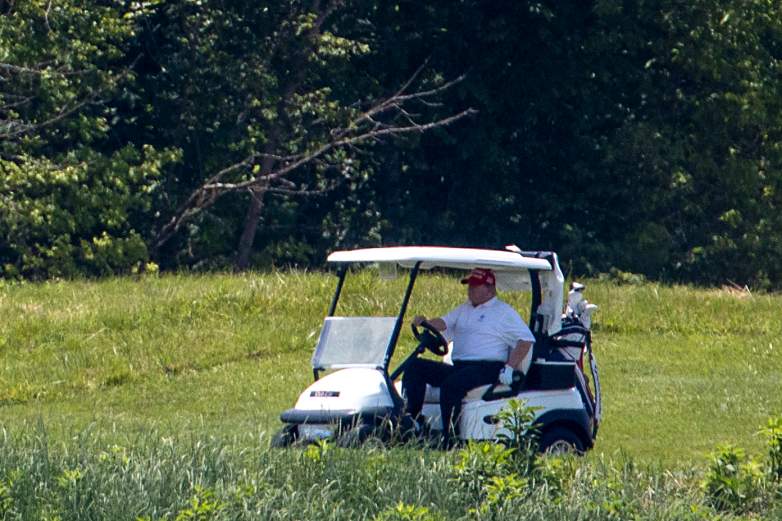 In July, following the backlash received by some media for playing golf while the coronavirus pandemic worsens in America, former Secretary of Labor Robert Reich tweeted, “Another horrifying fact of the Trump administration’s response to the pandemic: In the past two months, Trump has played golf more times than he has met with Dr. Fauci.”

In response, Trump tweeted, “I know many in business and politics that work out endlessly, in some cases to a point of exhaustion. It is their number one passion in life, but nobody complains. My ‘exercise’ is playing, almost never during the week, a quick round of golf.”