Having filled arguably its biggest roster hole with two-time Pro Bowl left tackle Orlando Brown Jr. in the days leading up to the 2021 NFL Draft, the Kansas City Chiefs used two selections to round out its offseason offensive line overhaul.

While sixth-round guard Trey Smith is already garnering hype as the potential “steal of this draft,” it was the team’s second pick in the second round — Oklahoma center Creed Humphrey — that sent Chiefs Kingdom into a social media frenzy.

Although the Big 12 Offensive Lineman of the Year was the third center off the board this year, Chiefs assistant player personnel director Ryan Poles is confident Humphrey can develop into an impactful player up front, even comparing him to an AFC rival starter.

The latest Chiefs news straight to your inbox! Join the Heavy on Chiefs newsletter here! 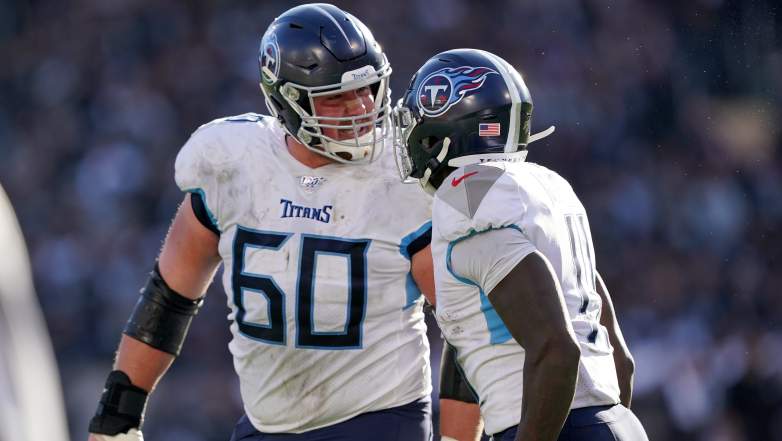 “Yeah one guy that came to mind when I watched him over the last two years, is like a Ben Jones,” Poles said, via USA Today’s Chiefs Wire. “Big, wide, tough, gritty, I kind of labeled him as the ‘get the job done’ type guy. Highly intelligent, leader, all of those things kind of come together so that’s the first guy that came to mind while watching him.”

Jones enters his 10th season in the league in 2021 and sixth with the Titans. Originally a fourth-round pick (No. 99 overall) of the Houston Texans in 2012, the 31-year-old has started 122 of 143 career games to date. Although Jones has never been recognized as a Pro Bowler or All-Pro, he is widely viewed as one of the more consistent and underrated centers in the NFL, even earning the second-highest grade at the position from Pro Football Focus for 2019.

While the Chiefs’ second-round pick does share a number of physical and intangible traits with Jones, one unique difference between the two is Humphrey’s left-handedness, a rare attribute among pro centers.

It’s not yet clear if Kansas City will push the high school wrestling standout to switch hands, his snapping ability didn’t pop up as a red flag among many evaluators. Neither did his protection skills, which limited defenders to zero sacks and two quarterback hits across 39 games and 1,297 pass blocking snaps for the Sooners, according to Pro Football Focus.

After its makeshift frontline allowed Patrick Mahomes to be sacked three times and pressured on 29-of-56 dropbacks in Super Bowl LV, Humphrey’s arrival is a welcome one for Chiefs Kingdom. The feeling is mutual, too.

”I’ve had the chance to play with some good quarterbacks at OU and it’s been a big help for me,” Humphrey told reporters on April 30. “Just their leadership skills and everything like that, it helps me a lot throughout my career, and getting to play with a player like Patrick Mahomes it’s so exciting just because he’s so talented. He’s such a good player, he can change the dynamic of a whole game, so I can’t wait to get up there and start working with the team.”

The 21-year-old is expected to compete with free agent addition Austin Blythe for the starting job in 2021.

Chris Licata is an NFL contributor covering the Kansas City Chiefs from enemy territory in Denver, Colorado. Follow him on Twitter @Chris__Licata or join the Heavy on Chiefs Facebook community for the latest out of Chiefs Kingdom!